This tutorial introduces classification and clustering using R. Cluster analyses fall within the domain of classification methods which are used to find groups or patterns in data or to predict group membership. As such, they are widely used and applied in machine learning. For linguists, classification is not only common when it comes to phylogenetics but also in annotation-based procedures such as part-of-speech tagging and syntactic parsing.

This tutorial is based on R. If you have not installed R or are new to it, you will find an introduction to and more information how to use R here. For this tutorials, we need to install certain packages from an R library so that the scripts shown below are executed without errors. Before turning to the code below, please install the packages by running the code below this paragraph. If you have already installed the packages mentioned below, then you can skip ahead and ignore this section. To install the necessary packages, simply run the following code - it may take some time (between 1 and 5 minutes to install all of the libraries so you do not need to worry if it takes some time).

In a next step, we load the packages.

The most common method in linguistics that is sued to detect groups in data are cluster analyses. Cluster analyses are common in linguistics because they not only detect commonalities based on the frequency or occurrence of features but they also allow to visualize when splits between groups have occurred and are thus the method of choice in historical linguistics to determine and show genealogical relationships.

The next section focuses on the basic idea that underlies all cluster analyses. WE will have a look at some very basic examples to highlight and discuss the principles that cluster analyses rely on.

The underlying idea of cluster analysis is very simple and rather intuitive as we ourselves perform cluster analyses every day in our lives. This is so because we group things together under certain labels and into concepts. The first example used to show this, deals with types of trees and how we group these types of trees based on their outward appearance.

Imagine you see six trees representing different types of trees: a pine tree, a fir tree, an oak tree, a beech tree, a phoenix palm tree, and a nikau palm tree. Now, you were asked to group these trees according to similarity. Have a look at the plot below and see whether you would have come up with a similar type of grouping. 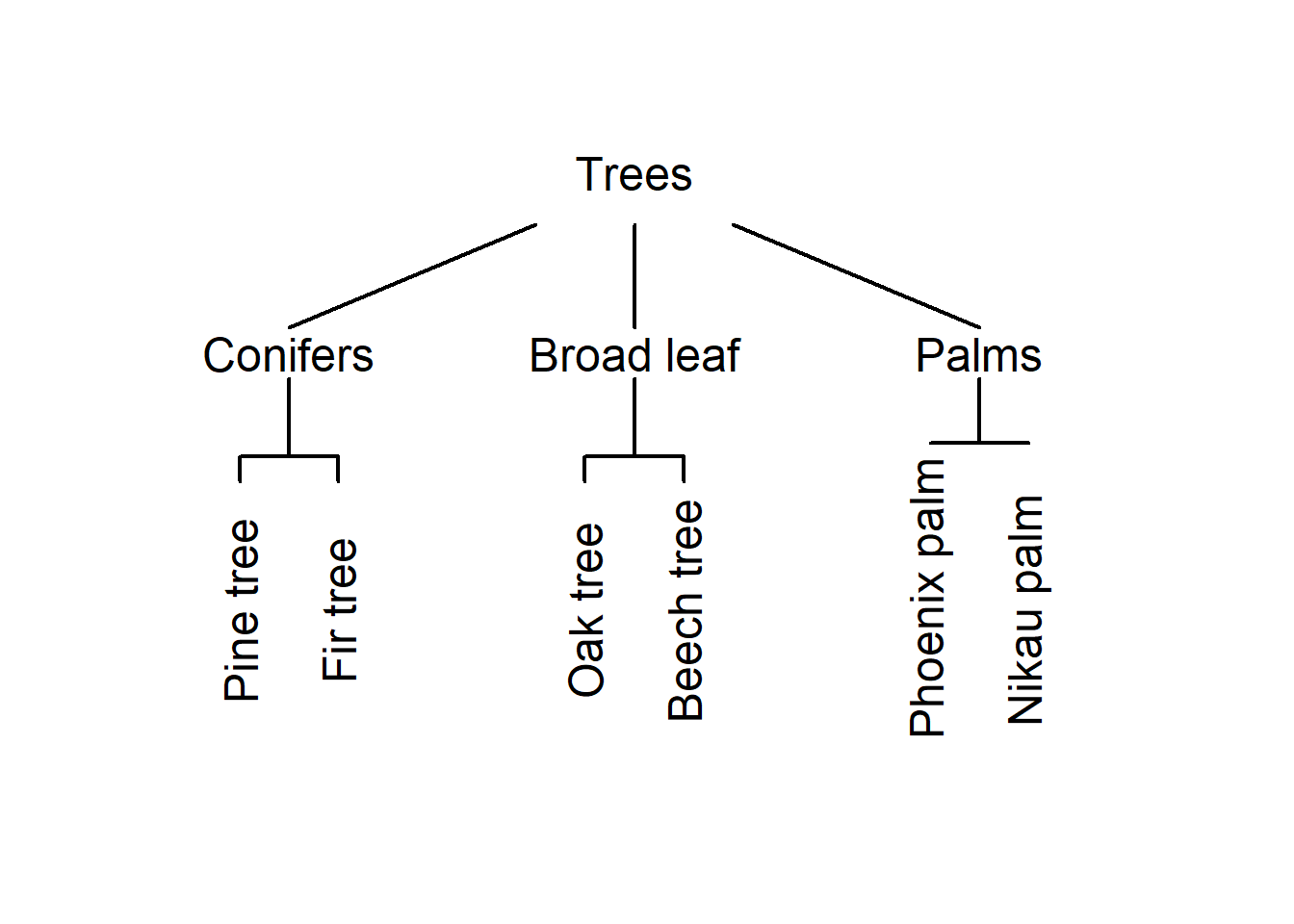 An alternative way to group the trees would be the following. 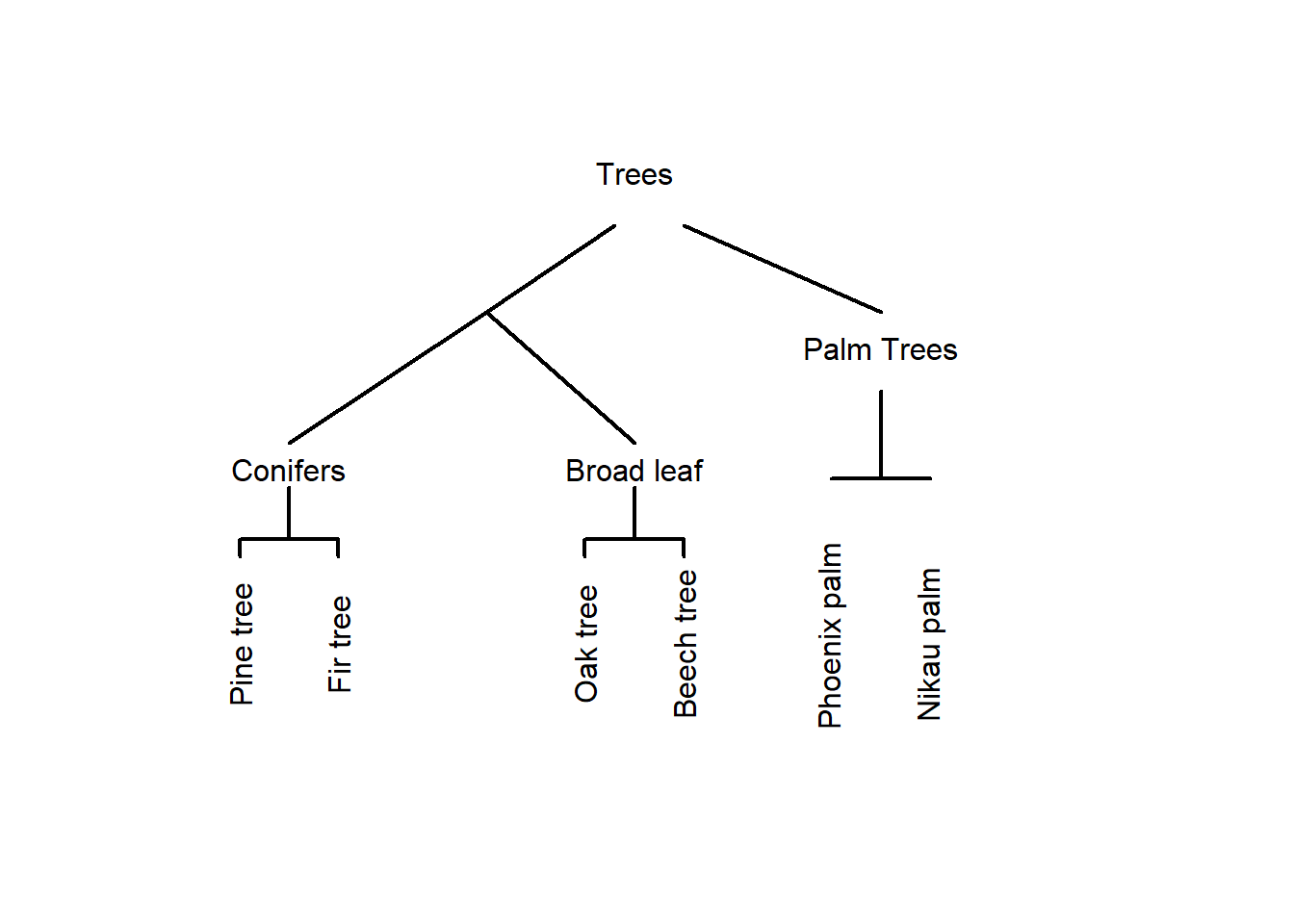 In this display, conifers and broad-leaf trees are grouped together because there are more similar to each other compared to palm trees. This poses the question of what is meant by similarity. Consider the display below. 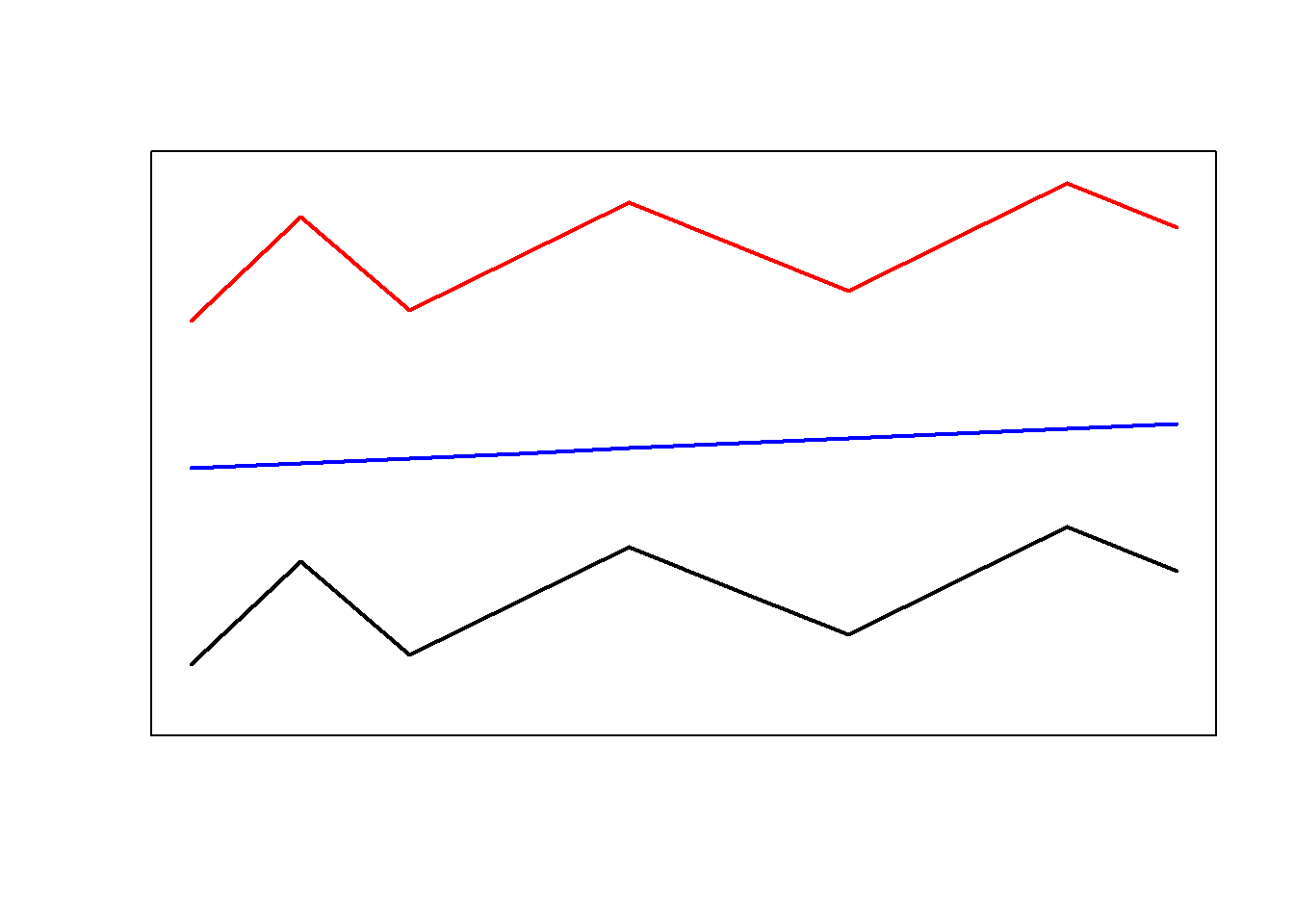 Are the red and the blue line more similar because they have the same shape or are the red and the black line more similar because they are closer together? There is no single correct answer here. Rather the plot intends to raise awareness about the fact that how cluster analyses group data depends on how similarity is defined in the respective algorithm.

Let’s consider another example to better understand how cluster analyses determine which data points should be merged when. Imagine you have five students and want to group them together based on their overall performance in school. The data that you rely on are their grades in math, music, and biology (with 1 being the best grade and 6 being the worst).

The first step in determining the similarity among students is to create a distance matrix.

Based on this distance matrix, we can now implement a cluster analysis in R.

To create a simple cluster object in R, we use the hclust function from the cluster package. The resulting object is then plotted to create a dendrogram which shows how students have been amalgamated (combined) by the clustering algorithm (which, in the present case, is called ward.D). 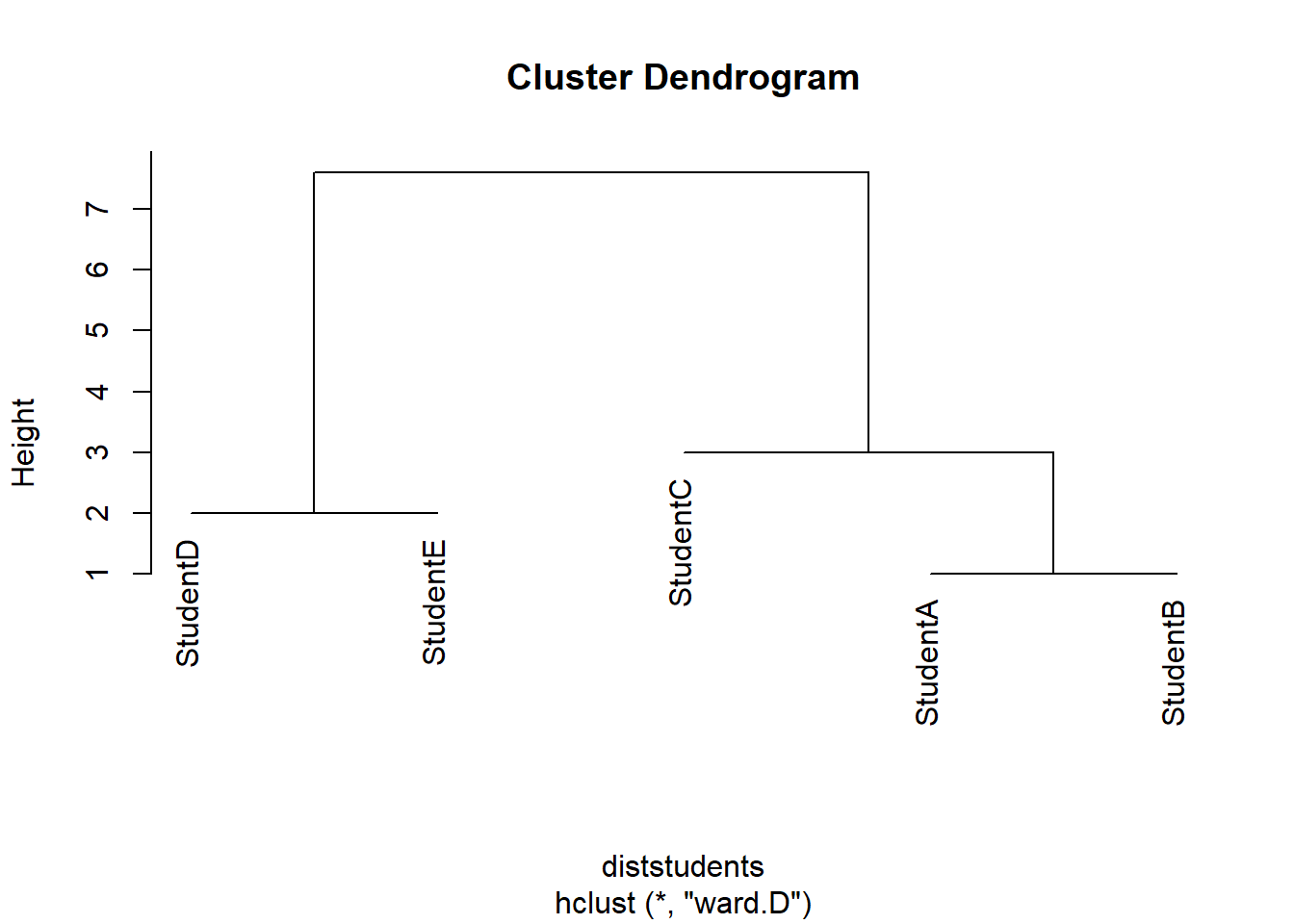 The next lowest distance now is 2.0 between Student D and Student E which means that these two students are merged next. The resulting distance matrix is shown below.

How and which elements are merged depends on the what is understood as distance. Since “distance” is such an important concept in cluster analyses, we will briefly discuss this notion to understand why there are so many different types of clustering algorithms and this cluster analyses.

To understand how a cluster analysis determines to which cluster a given data point belongs, we need to understand what different distance measures represent. Have a look at the Figure below which visually represents three different ways to conceptualize distance. 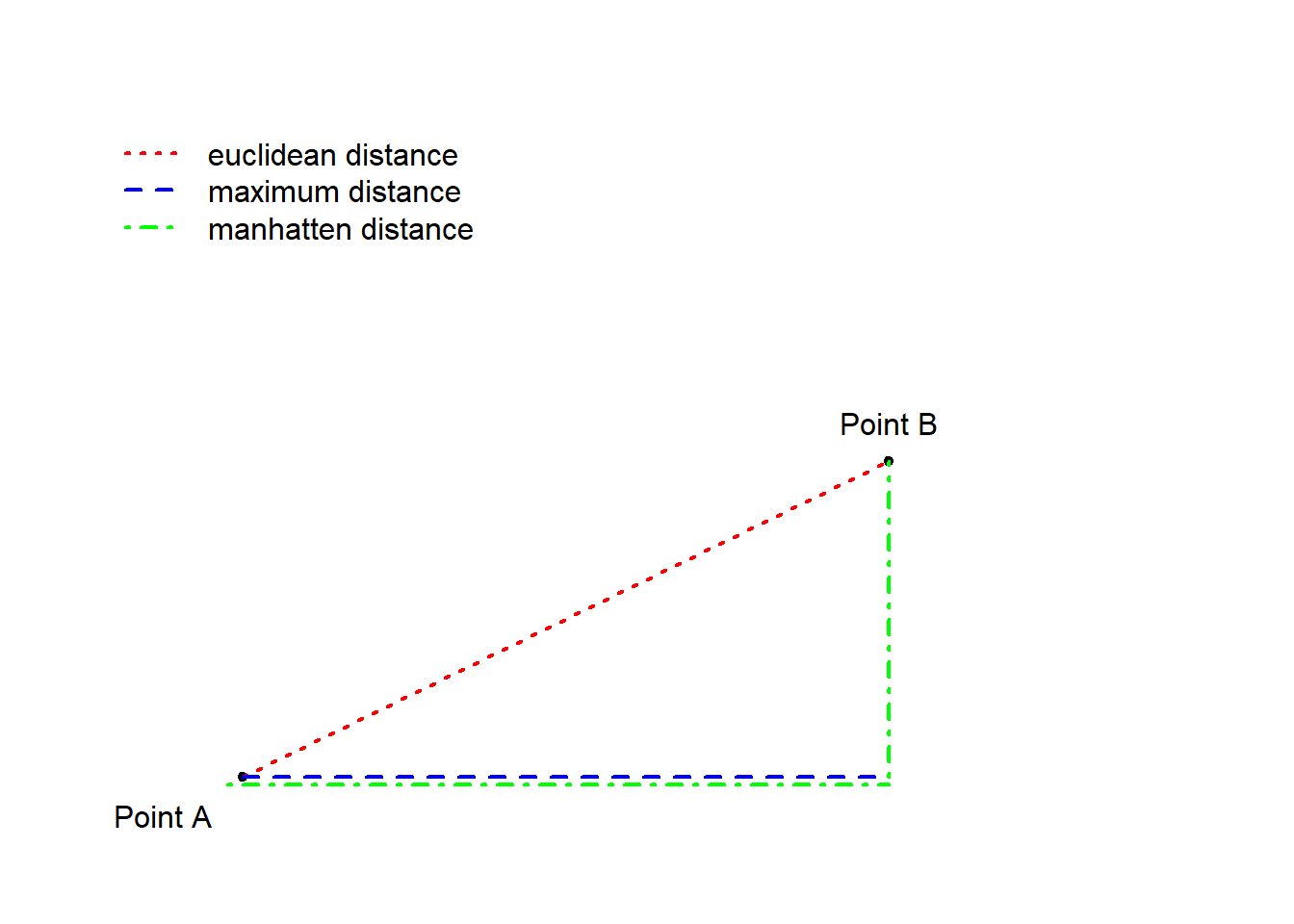 We will now turn to another example in order to delve a little deeper into how clustering algorithms work. In this example, we will find cluster of varieties of English based on the relative frequency of selected non-standard features (such as the relative frequencies of cleft constructions and tag questions). As a first step, we generate some fictional data set for this analysis.

As a next step, we create a cluster object based on the data we have just generated.

We assess if data is “clusterable” by testing if the data contains non-randomness. To this end, we calculate the Hopkins statistic which indicates how similar the data is to a random distribution.

The n in the get_clust_tendency functions represents the maximum number of clusters to be tested which should be number of predictors in the data.

As the Hopkins value is substantively higher than .5 (randomness) and closer to 1 (highly clusterable) than to .5, thus indicating that there is sufficient structure in the data to warrant a cluster analysis. As such, we can assume that there are actual clusters in the data and continue by generating a distance matrix using euclidean distances.

Below are other methods to create distance matrices with some comments on when using which metric is appropriate.

Next, we create a distance plot using the distplot function. If the distance plot shows different regions (non-random, non-uniform gray areas) then clustering the data is permittable as the data contains actual structures. 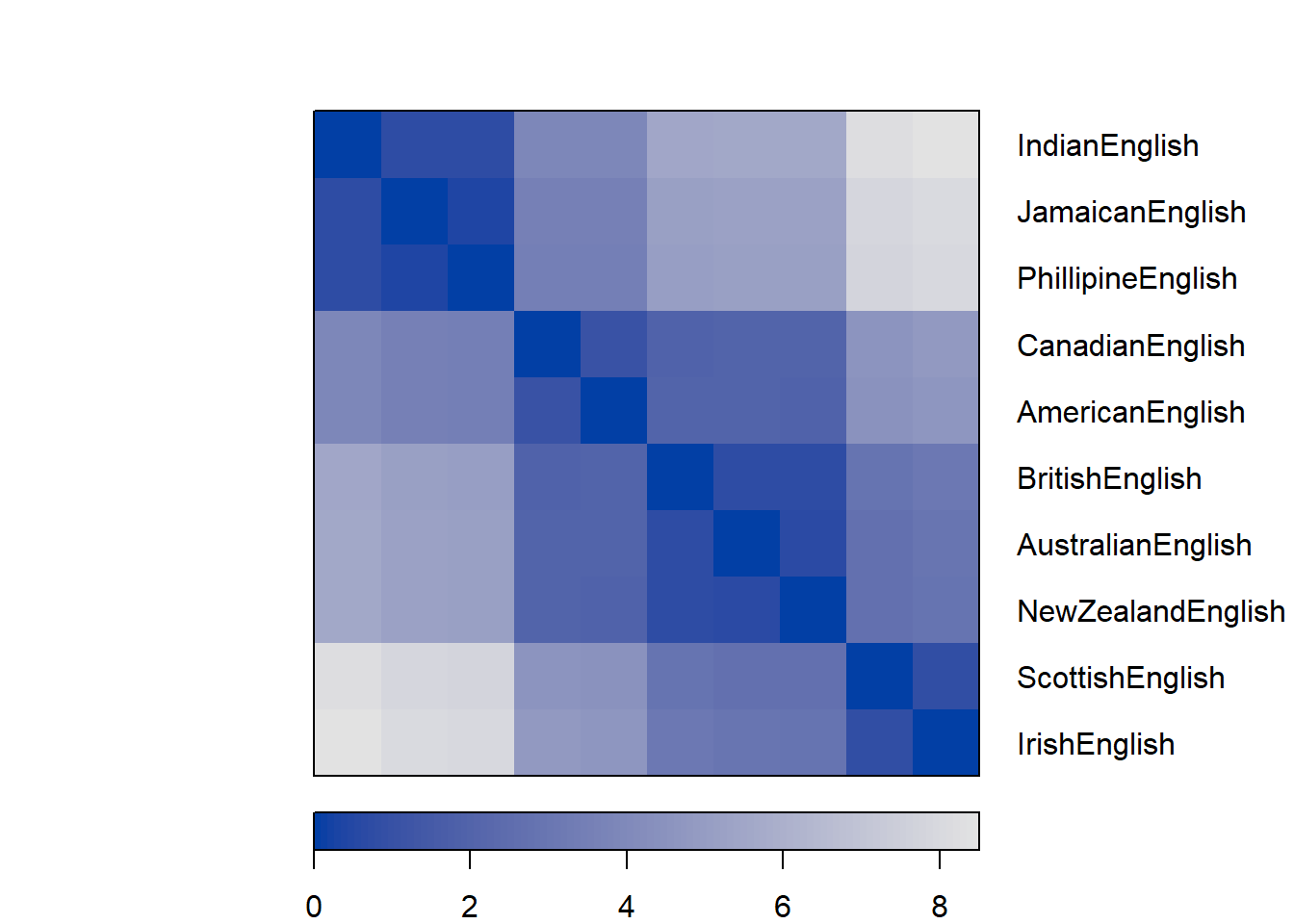 The most common method for clustering is called ward.D or ward.D2. Both of these linkage functions seek to minimize variance. This means that they cluster in a way that the amount of variance is at a minimum (comparable to the regression line in an ordinary least squares (OLS) design). 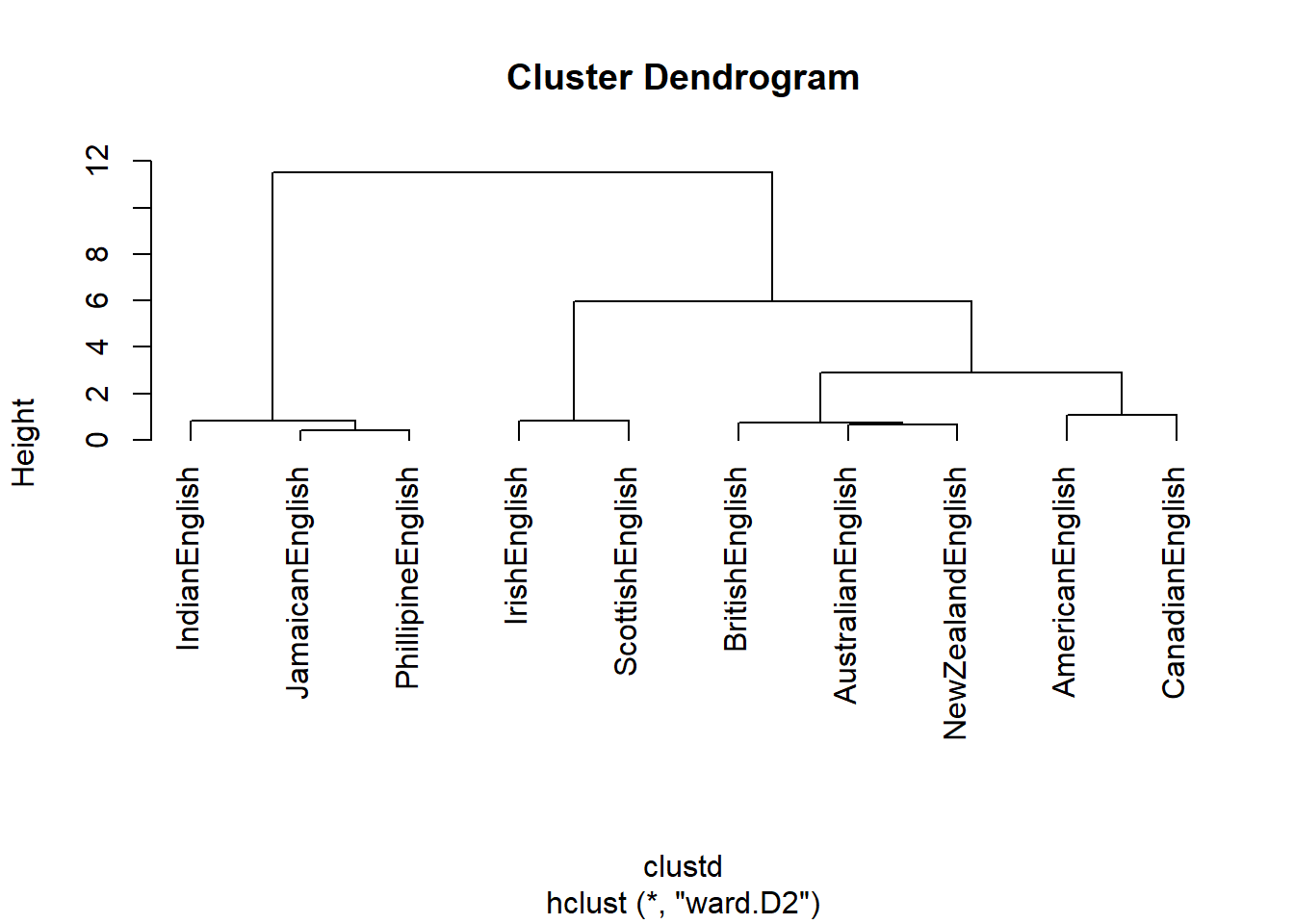 We will briefly go over some other, alternative linkage methods. Which linkage method is and should be used depends on various factors, for example, the type of variables (nominal versus numeric) or whether the focus should be placed on commonalities or differences. 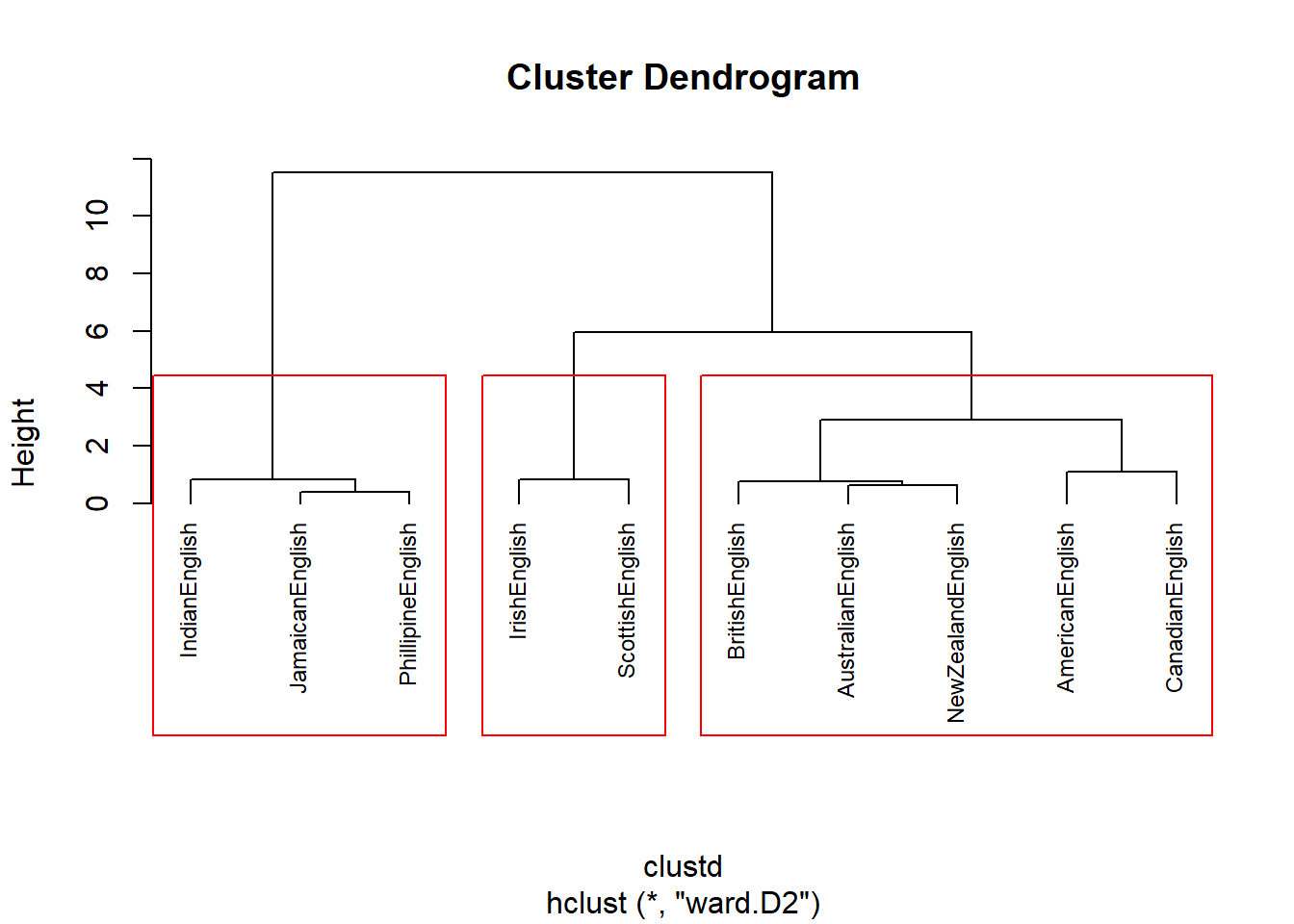 In a next step, we aim to determine which factors are particularly important for the clustering - this step is comparable to measuring the effect size in inferential designs. 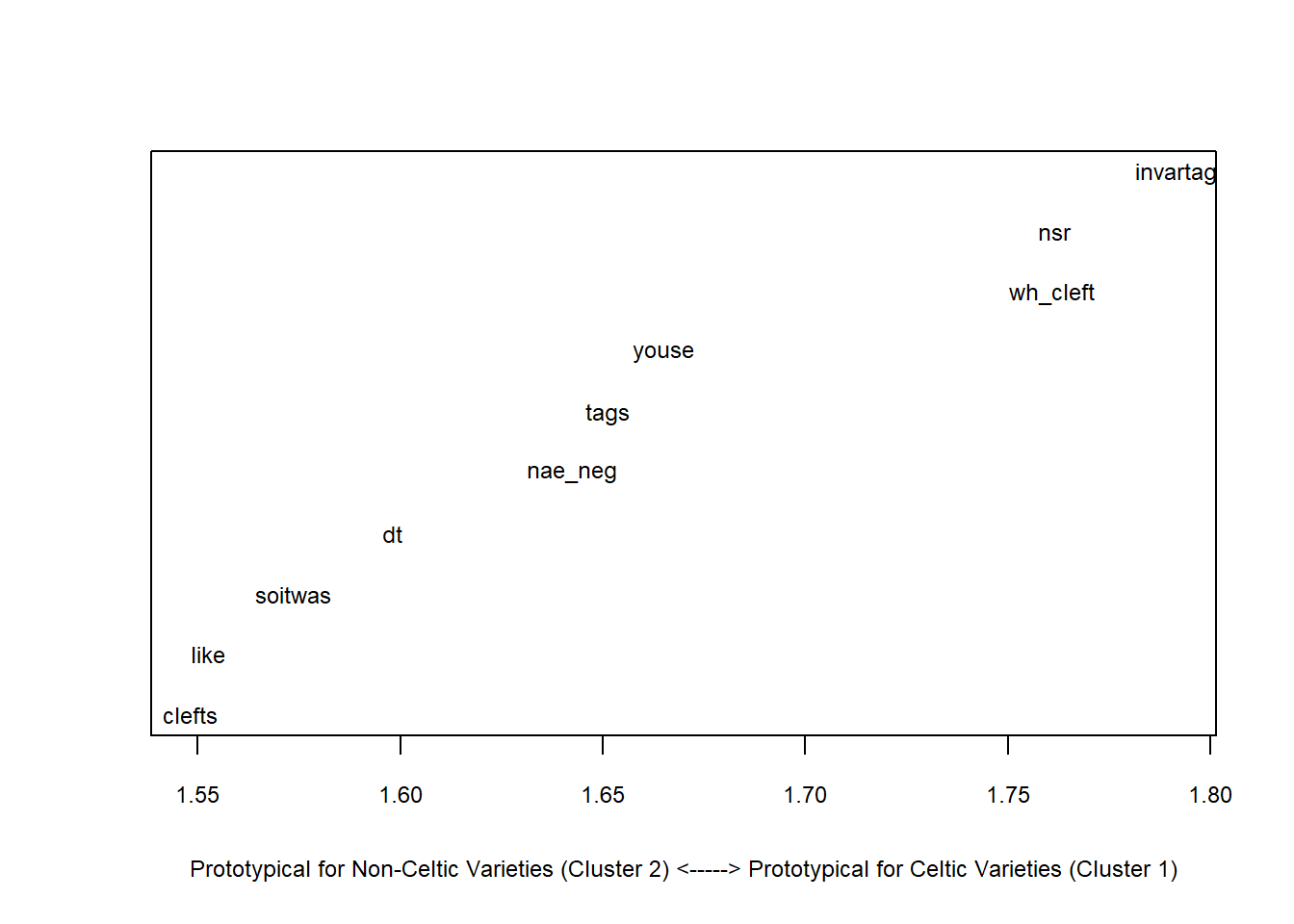 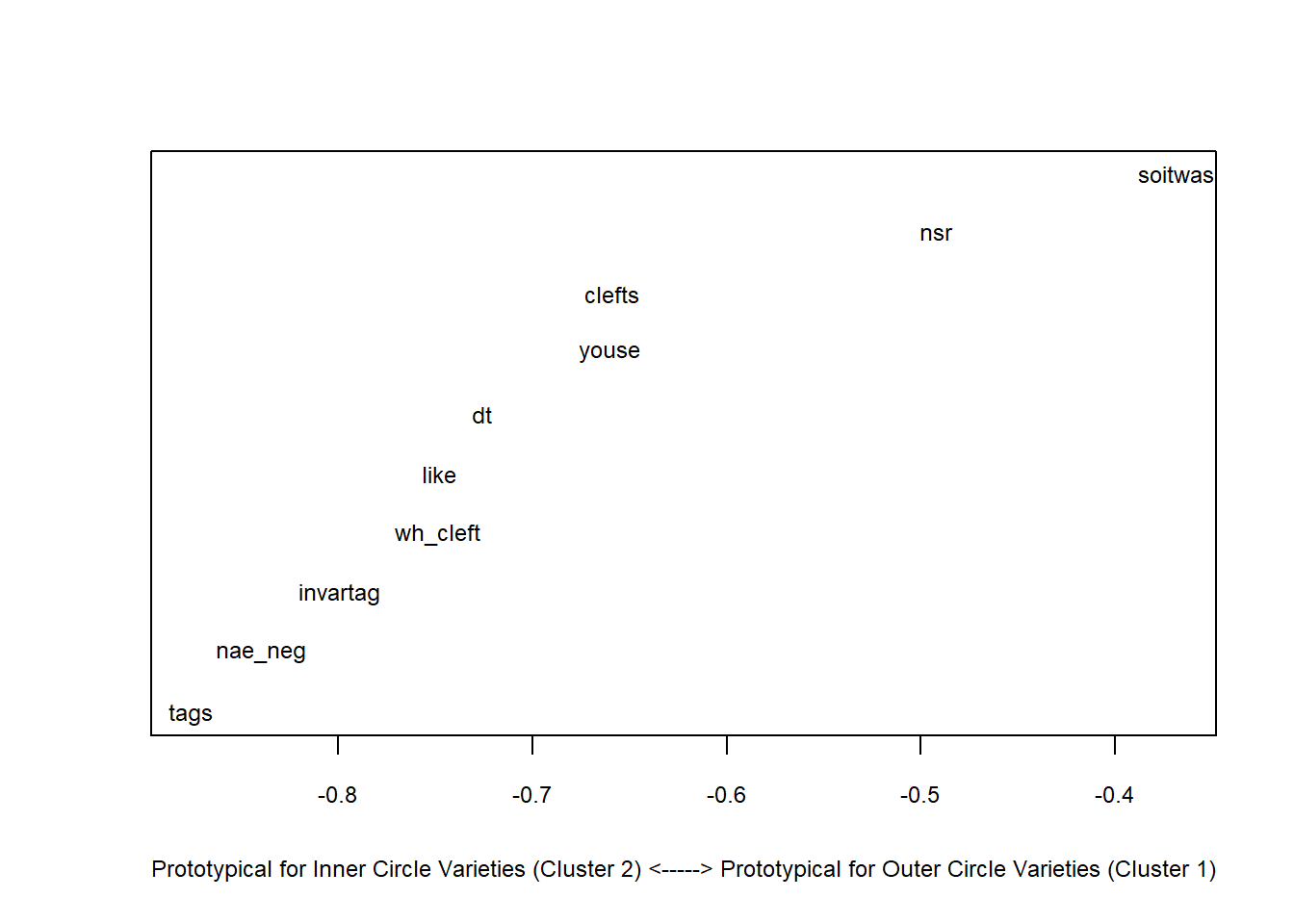 We see that discourse like is typical for other varieties and that the use of youse as 2nd person plural pronoun and invariant tags are typical for Celtic Englishes.

We will now test whether the cluster is justified by validating the cluster solution using bootstrapping. 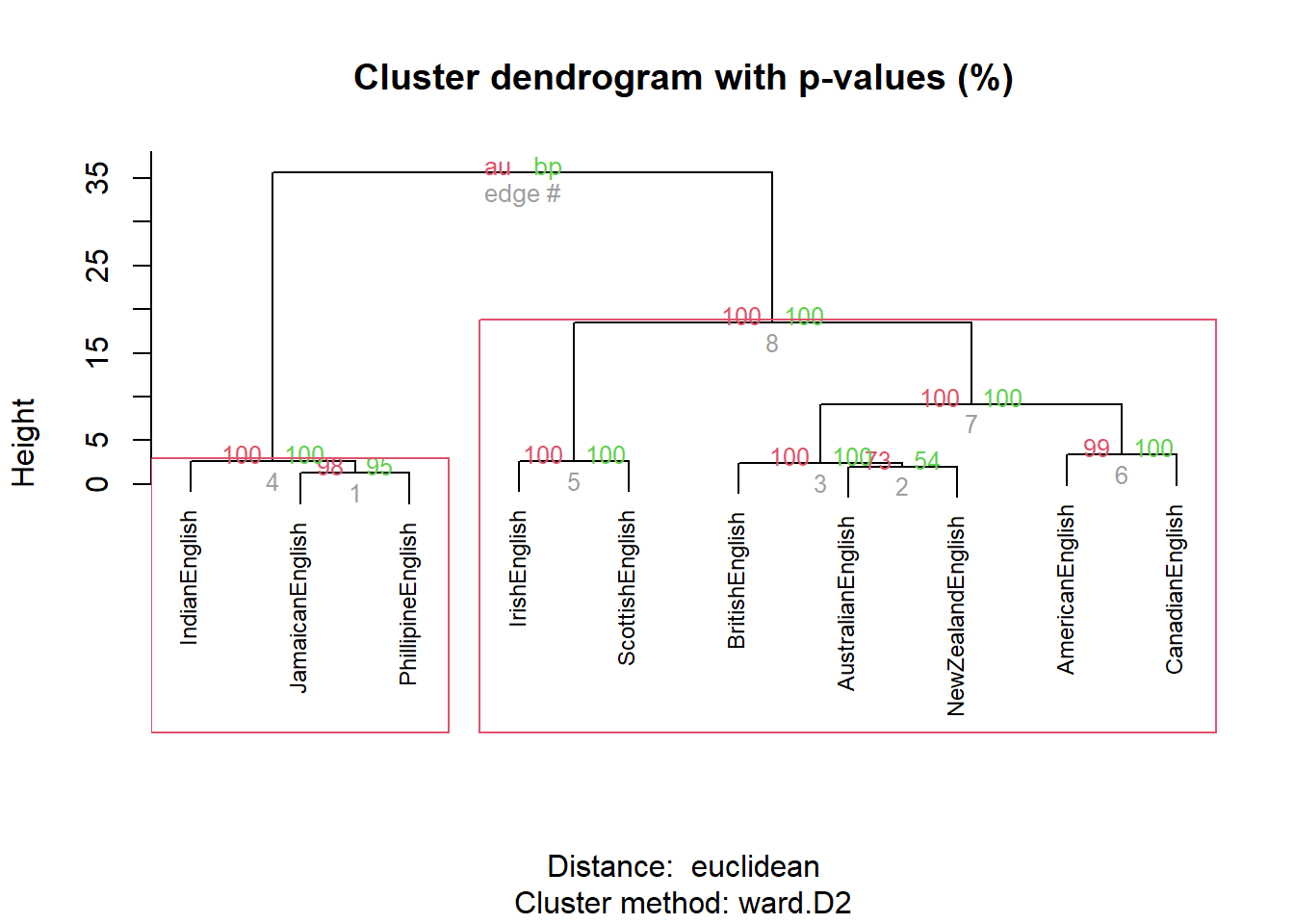 We can also use other packages to customize the dendrograms. 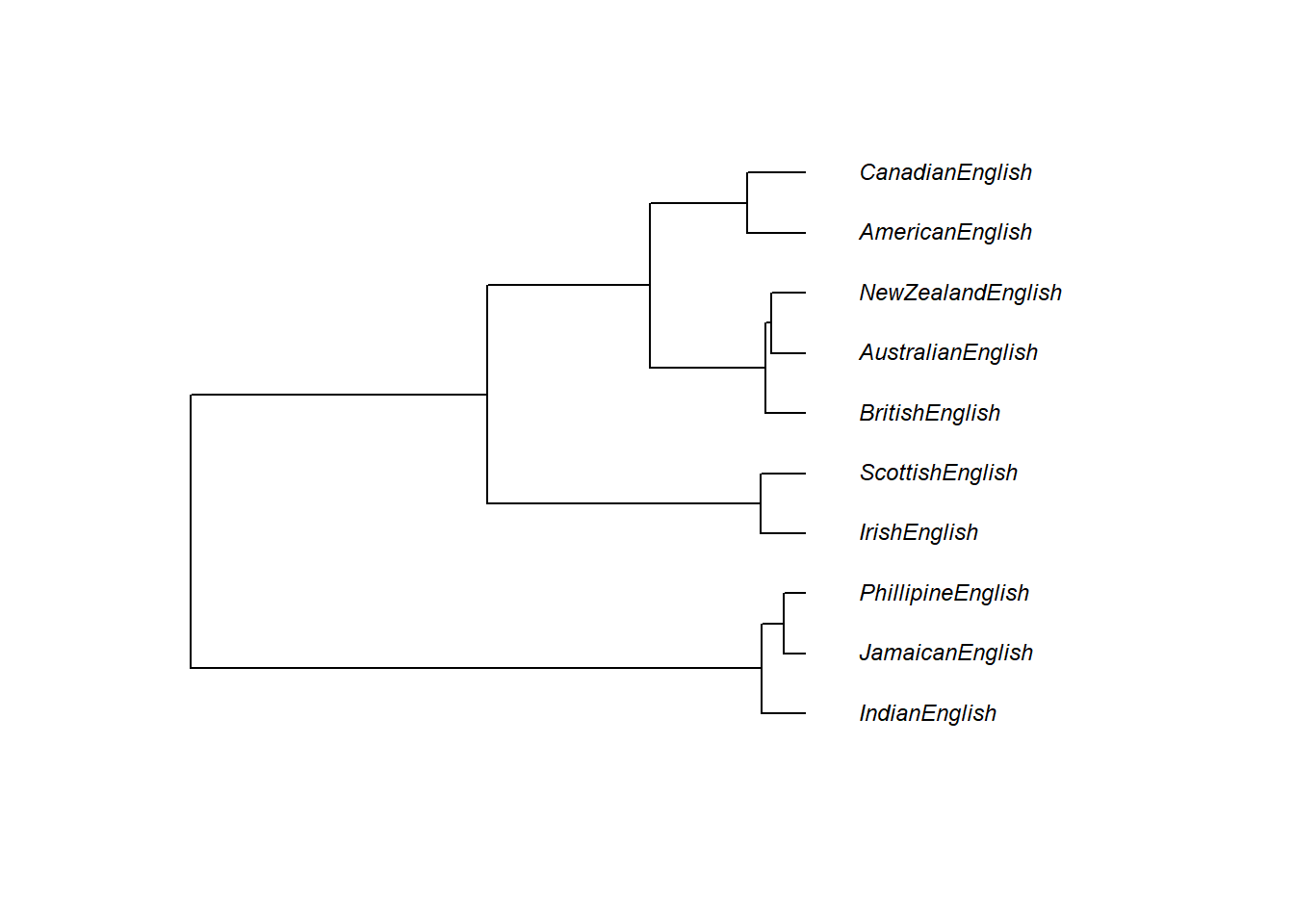 One useful customization is to display an unrooted rather than a rooted tree diagram. 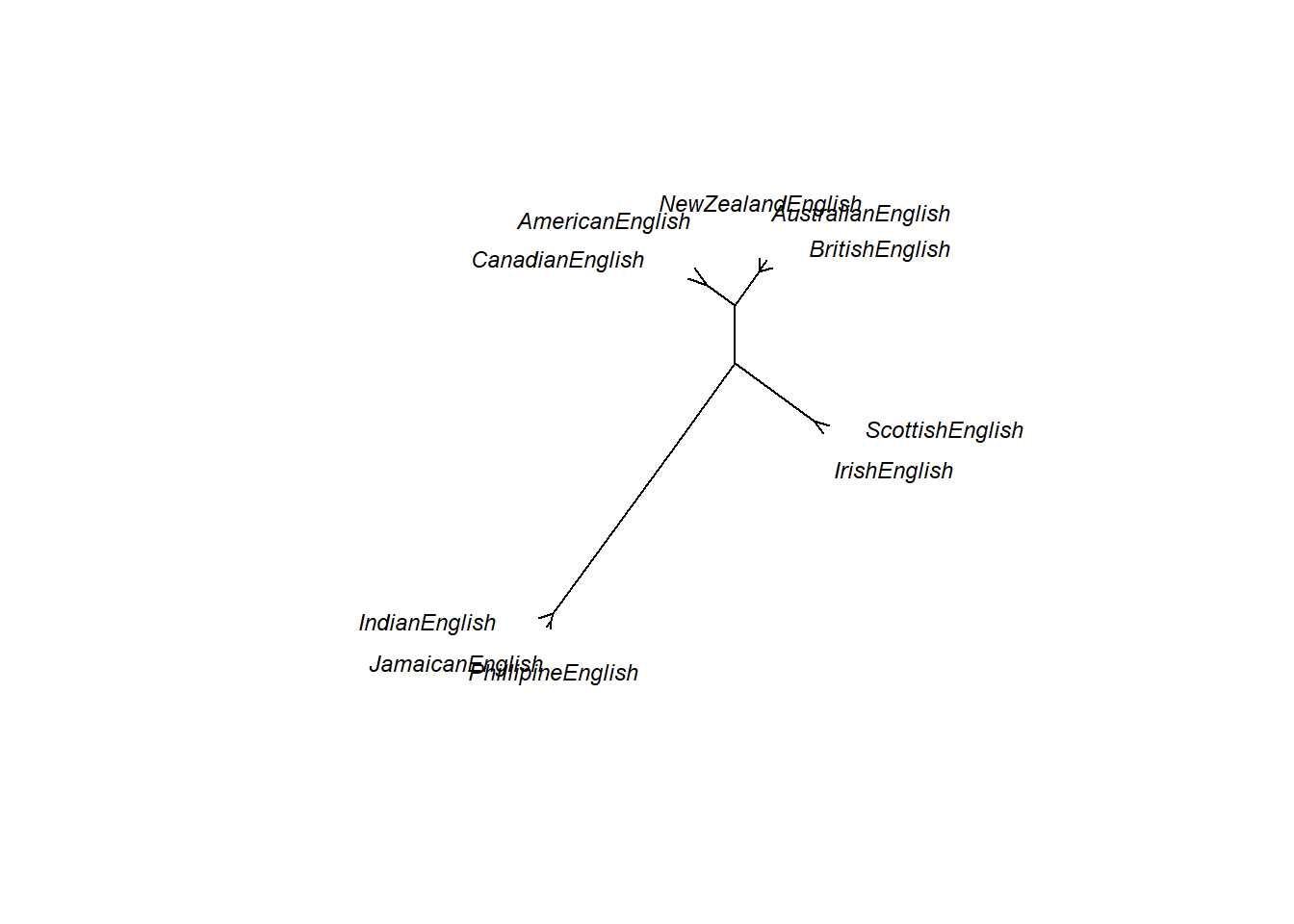 So far, all analyses were based on numeric data. However, especially when working with language data, the data is nominal or categorical rather than numeric. The following will thus show to implement a clustering method for nominal data.

In a first step, we will create a simple data set representing the presence and absence of features across varieties of English.

Now that we have our data, we will create a distance matrix but in contrast to previous methods, we will use a different distance measure that takes into account that we are dealing with nominal (or binary) data.

As before, we can now use hierarchical clustering to display the results as a dendrogram 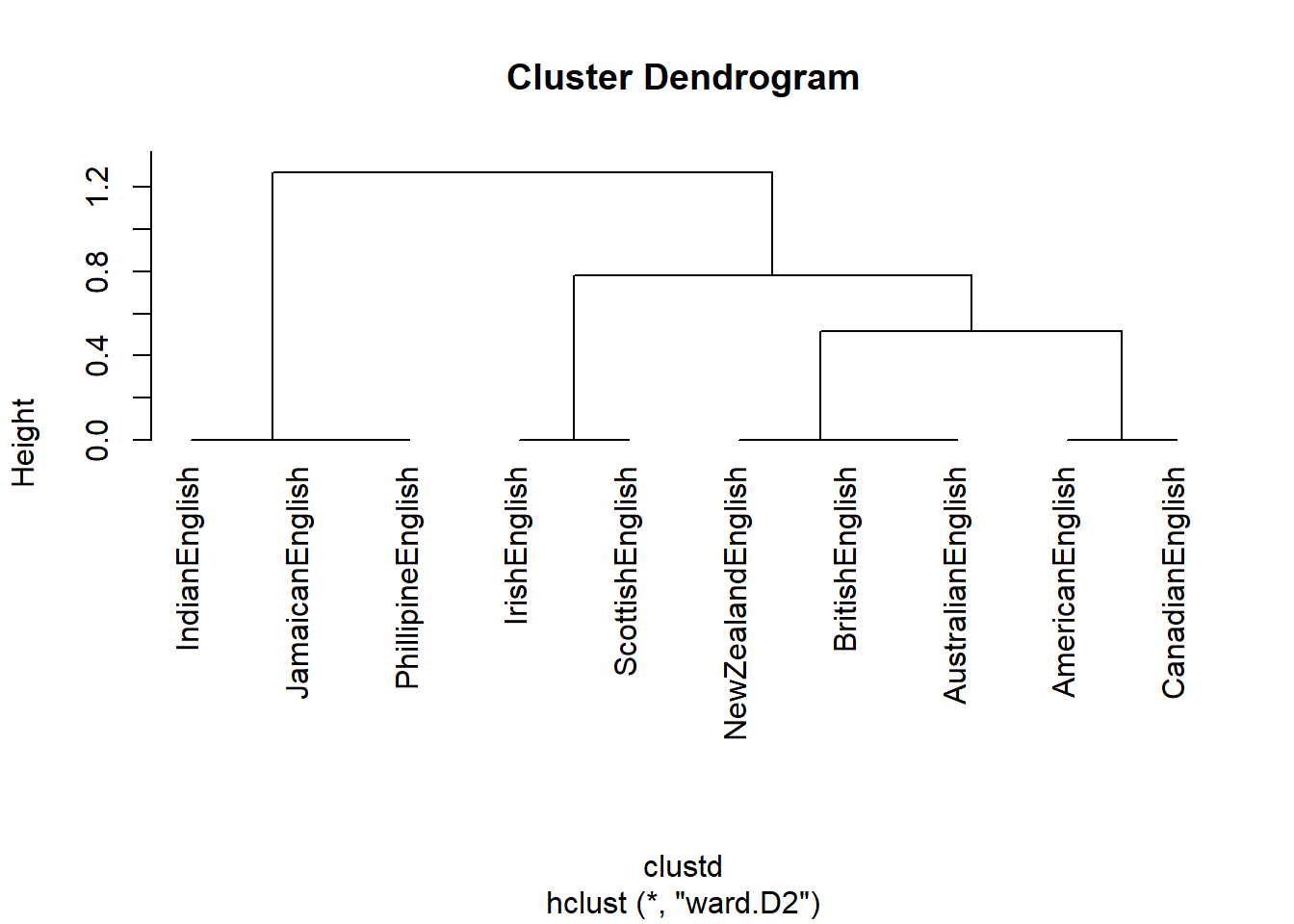 In a next step, we want to determine which features are particularly distinctive for one cluster (the “Celtic” cluster containing Irish and Scottish English).

Clustering is a highly complex topic and there many more complexities to it. However, this should have helped to get you started.

Correspondence analysis (CA) represents a multivariate statistical technique that provides a graphic method of exploring the relationship between variables in a contingency table. CA is conceptually similar to principal component analysis (PCA), but applies to categorical rather than continuous data.

CA consists out of the following four steps:

In this tutorial, we investigate similarities among amplifiers based on their co-occurrences (word embeddings) with adjectives. Adjective amplifiers are elements such as those in 1. to 5.

We start by loading the data, and then displaying the data which is called vsmdata and consist of 5,000 observations of adjectives and contains two columns: one column with the adjectives (Adjectives) and another column which has the amplifiers (0 means that the adjective occurred without an amplifier).

In addition, we collapse all amplifiers that occur less than 20 times into a bin category (other).

We now use a balloon plot to see if there are any potential correlations between amplifiers and adjectives. 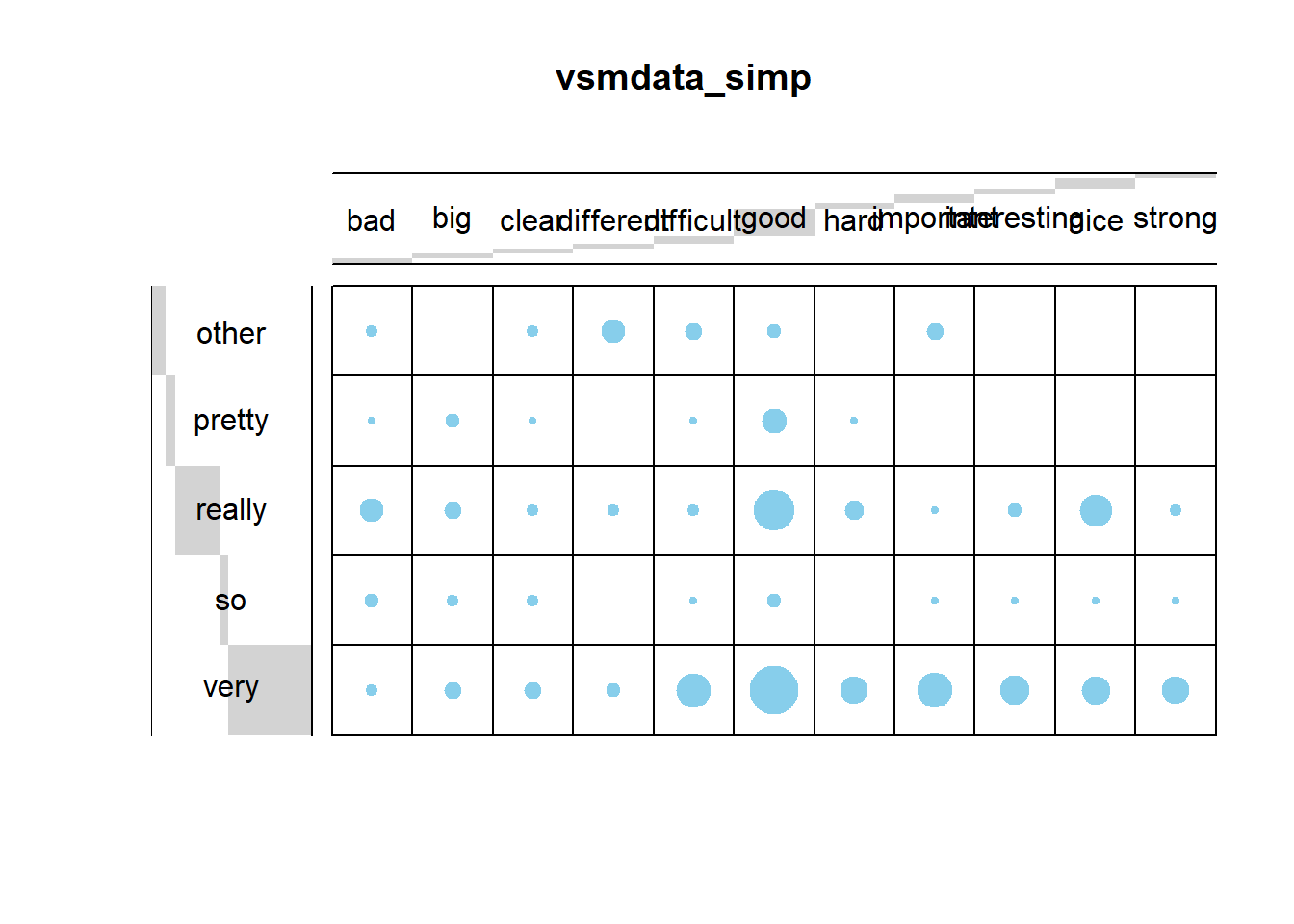 The balloon plot suggests that there are potential correlations as the dots (balloons) are not distributed evenly according to frequency. To validate if there is significant correlation between the amplifier types and the adjectives using a \(\chi\)2- test.

The \(\chi\)2- test confirms that there is a significant correlations between amplifier types and the adjectives.

The display of the eigenvalues provides information on the amount of variance that is explained by each dimension. The first dimension explains 49.87 percent of the variance, the second dimension explains another 30.34 percent of the variance, leaving all other variables with relative moderate explanatory power as they only account for 20 percent variance. We now plot and interpret the results of the CA. 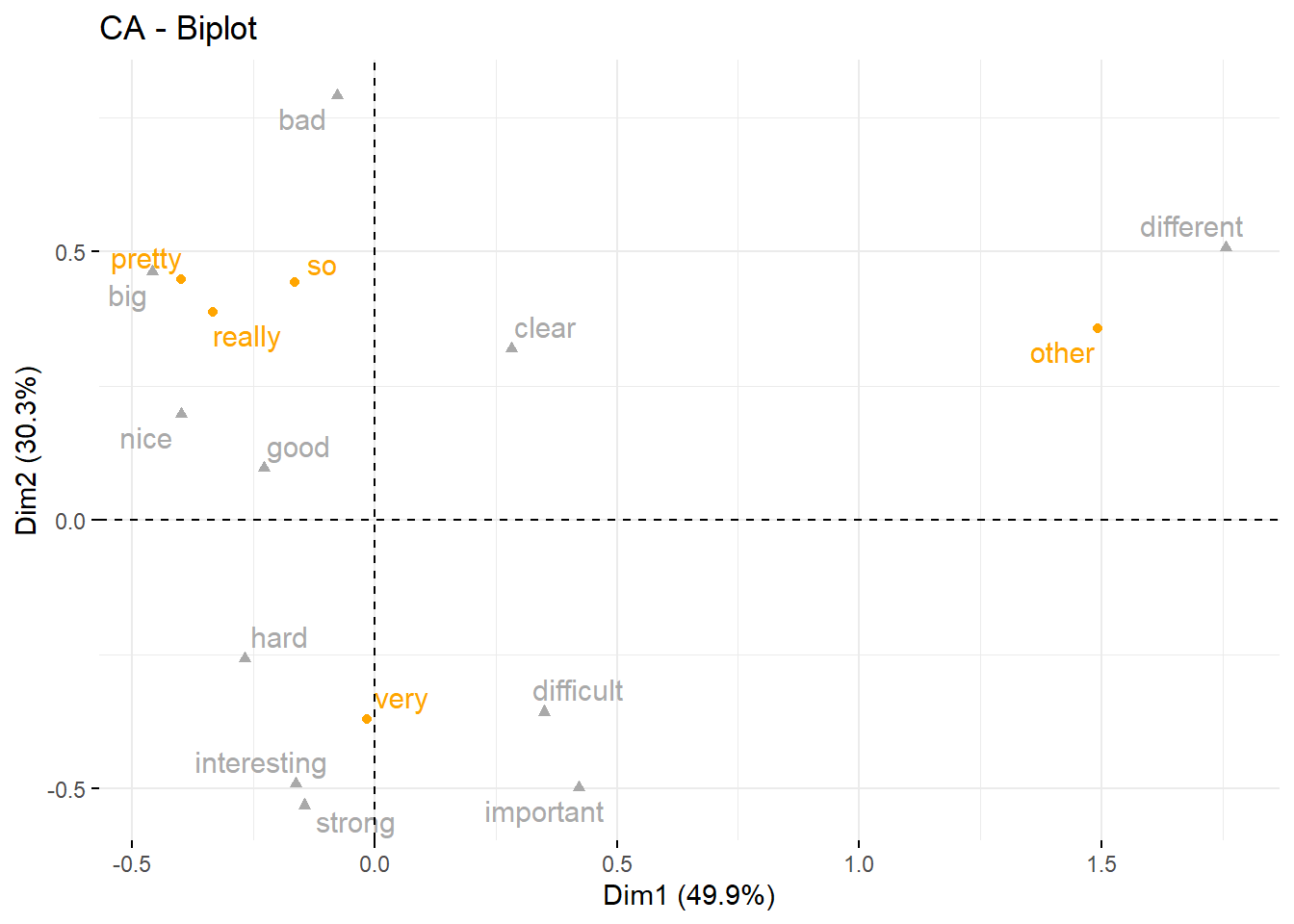