This tutorial shows how to generate interactive data visualizations in R.

This tutorial is aimed at beginners and intermediate users of R with the aim of showcasing how to generate interactive visualizations and how to process the resulting concordances using R. The aim is not to provide a fully-fledged analysis but rather to show and exemplify selected useful methods associated with interactive graphs

This tutorial is based on R. If you have not installed R or are new to it, you will find an introduction to and more information how to use R here. For this tutorials, we need to install certain packages from an R library so that the scripts shown below are executed without errors. Before turning to the code below, please install the packages by running the code below this paragraph. If you have already installed the packages mentioned below, then you can skip ahead and ignore this section. To install the necessary packages, simply run the following code - it may take some time (between 1 and 5 minutes to install all of the libraries so you do not need to worry if it takes some time).

Once you have installed R and RStudio and also initiated the session by executing the code shown above, you are good to go.

To get started with motion charts, we load the googleVis package for the visualizations, the tidyverse package for data processing, and we load a data set called coocdata. The coocdata contains information about how often adjectives were amplified by a degree adverb across time (see below).

The coocdata is rather complex and requires some processing. First, we rename the columns to render their naming more meaningful. In this context we rename the OBS column Frequency and the Amp column Amplifier. As we are only interested if an adjective was amplified by very, we collapse all amplifiers that are not very in a bin category called other. We then calculate the frequency of the adjective within each time period and also the frequency with which each adjective is amplified by either very or other amplifiers. Then, we calculate the percentage with which each adjective is amplified by very.

We now have a data set that we can use to generate interactive visualization.

If you want to display the visualization in a Notebook environment, you can use the plot function as shown below.

However, if you want to display the visualization on a website, you must use the print function rather than the plot function and specify that you want to print a chart.

To create an interactive line chart, we use the gvisLineChart function as shown below.

If you want to display the visualization in a Notebook environment, you can use the plot function. For website, you must use the print function and specify that you want to print a chart.

To create an interactive bar chart, we use the gvisBarChart function as shown below.

Animations or GIFs (Graphics Interchange Format) can be generated using the gganimate package written by Thomas Lin Pedersen and David Robinson. The gganimate package allows to track changes over time while simultaneously displaying several variables in one visualization. As we will create animations using the ggplot2 package, we also load that package from the library. In this case, we use the gapminder data set which comes with the gapminder package and which contains information about different countries, such as the average life expectancy, the population, or the gross domestic product (GDP), across time.

After loading the data, we create static plot so that we can check what the data looks like at one point in time. 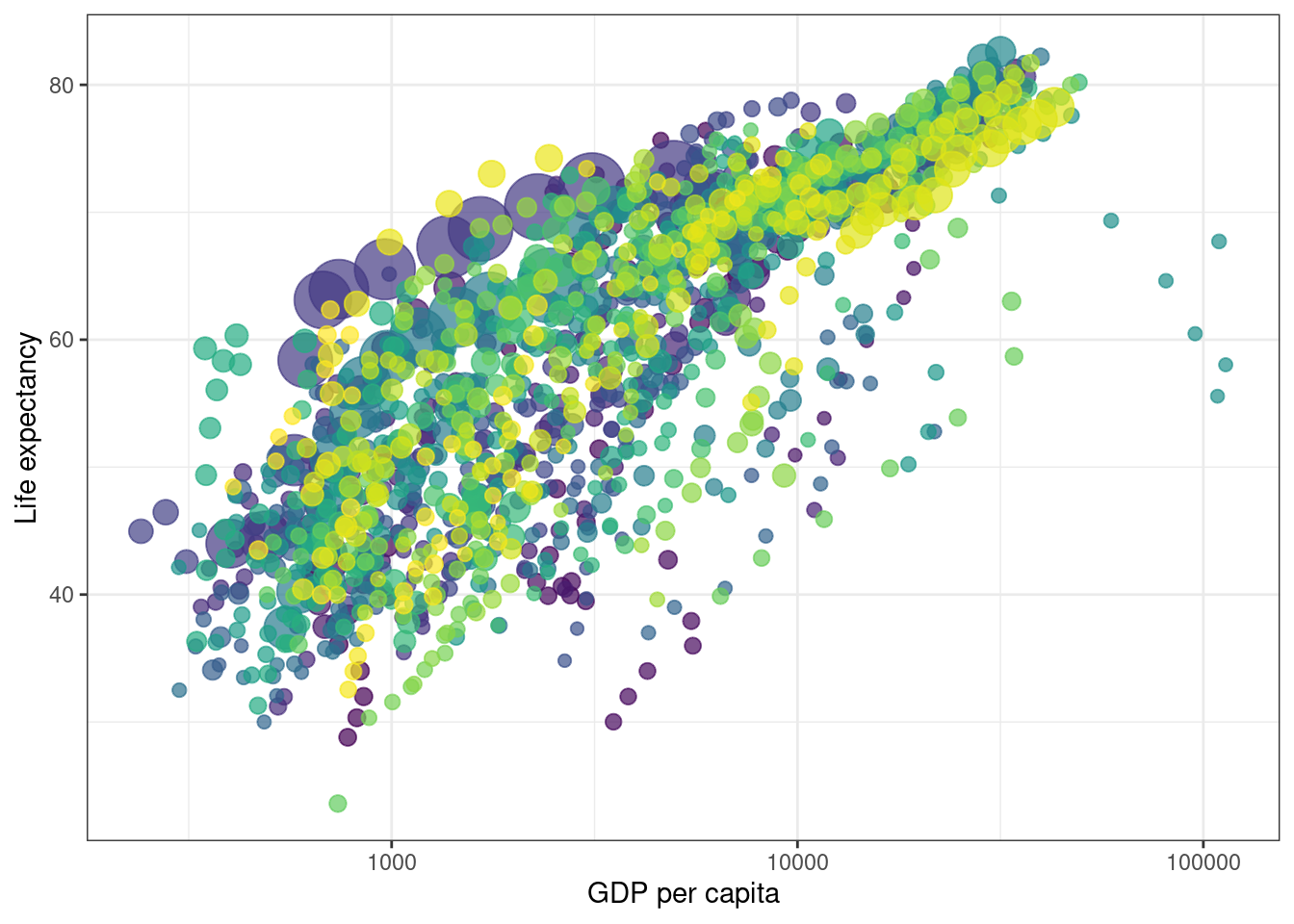 We can then turn static plot into animation by defining the content of the transition_time object.

Another way to generate animations is to use the plotly package as shown below. While I personally do not find the visualizations created by the plot_ly function as visually appealing, it has the advantage that it allows mouse-over effects.

You can also use the leaflet package to create interactive maps. In this example, we display the beautiful city of Brisbane and the visualization allows you to zoom in and out.

We start by loading the required package from the library, adding population density to the data, and removing data points without meaningful information (e.g. we set values like Inf to NA).

We can now display the data.