Many analyses of language data require that we distinguish different parts of speech. In order to determine the word class of a certain word, we use a procedure which is called part-of-speech tagging (commonly referred to as pos-, pos-, or PoS-tagging). pos-tagging is a common procedure when working with natural language data. Despite being used quite frequently, it is a rather complex issue that requires the application of statistical methods that are quite advanced. In the following, we will explore different options for pos-tagging and syntactic parsing.

Parts-of-speech, or word categories, refer to the grammatical nature or category of a lexical item, e.g. in the sentence Jane likes the girl each lexical item can be classified according to whether it belongs to the group of determiners, verbs, nouns, etc. pos-tagging refers to a (computation) process in which information is added to existing text. This process is also called annotation. Annotation can be very different depending on the task at hand. The most common type of annotation when it comes to language data is part-of-speech tagging where the word class is determined for each word in a text and the word class is then added to the word as a tag. However, there are many different ways to tag or annotate texts.

Pos–tagging assigns part-of-speech tags to character strings (these represent mostly words, of course, but also encompass punctuation marks and other elements). This means that pos–tagging is one specific type of annotation, i.e. adding information to data (either by directly adding information to the data itself or by storing information in e.g. a list which is linked to the data). It is important to note that annotation encompasses various types of information such as pauses, overlap, etc. pos–tagging is just one of these many ways in which corpus data can be enriched. Sentiment Analysis, for instance, also annotates texts or words with respect to its or their emotional value or polarity.

Annotation is required in many machine-learning contexts because annotated texts are commonly used as training sets on which machine learning or deep learning models are trained that then predict, for unknown words or texts, what values they would most likely be assigned if the annotation were done manually. Also, it should be mentioned that by many online services offer pos-tagging (e.g. here or here.

In the example above, NNP stands for proper noun (singular), VBZ stands for 3rd person singular present tense verb, DT for determiner, and NN for noun(singular or mass). The pos-tags used by the openNLPpackage are the Penn English Treebank pos-tags. A more elaborate description of the tags can be found here which is summarised below:

Assigning these pos-tags to words appears to be rather straight forward. However, pos-tagging is quite complex and there are various ways by which a computer can be trained to assign pos-tags. For example, one could use orthographic or morphological information to devise rules such as. . .

Using such rules has the disadvantage that pos-tags can only be assigned to a relatively small number of words as most words will be ambiguous – think of the similarity of the English plural (-(e)s) and the English 3rd person, present tense indicative morpheme (-(e)s), for instance, which are orthographically identical.Another option would be to use a dictionary in which each word is as-signed a certain pos-tag and a program could assign the pos-tag if the word occurs in a given text. This procedure has the disadvantage that most words belong to more than one word class and pos-tagging would thus have to rely on additional information.The problem of words that belong to more than one word class can partly be remedied by including contextual information such as. .

This procedure works quite well but there are still better options.The best way to pos-tag a text is to create a manually annotated training set which resembles the language variety at hand. Based on the frequency of the association between a given word and the pos-tags it is assigned in the training data, it is possible to tag a word with the pos-tag that is most often assigned to the given word in the training data.All of the above methods can and should be optimized by combining them and additionally including pos–n–grams, i.e. determining a pos-tag of an unknown word based on which sequence of pos-tags is most similar to the sequence at hand and also most common in the training data.This introduction is extremely superficial and only intends to scratch some of the basic procedures that pos-tagging relies on. The interested reader is referred to introductions on machine learning and pos-tagging such as e.g.https://class.coursera.org/nlp/lecture/149.

There are several different R packages that assist with pos-tagging texts (see Kumar and Paul 2016). In this tutorial, we will use the udpipe (Wijffels 2021) and the openNLP packages (Hornik 2019). Each of these has advantages and shortcomings and it is advantageous to try which result best matches one’s needs. That said, the udpipe package is really great as it is easy to use, covers a wide range of languages, is very flexible, and very accurate.

This tutorial is based on R. If you have not installed R or are new to it, you will find an introduction to and more information how to use R here. For this tutorials, we need to install certain packages from an R library so that the scripts shown below are executed without errors. Before turning to the code below, please install the packages by running the code below this paragraph. If you have already installed the packages mentioned below, then you can skip ahead ignore this section. To install the necessary packages, simply run the following code - it may take some time (between 1 and 5 minutes to install all of the libraries so you do not need to worry if it takes some time).

UDPipe was developed at the Charles University in Prague and the udpipe R package (Wijffels 2021) is an extremely interesting and really fantastic package as it provides a very easy and handy way for language-agnostic tokenization, pos-tagging, lemmatization and dependency parsing of raw text in R. It is particularly handy because it addresses and remedies major shortcomings that previous methods for pos-tagging had, namely

The available pre-trained language models in UDPipe are:

The udpipe R package also allows you to easily train your own models, based on data in CONLL-U format, so that you can use these for your own commercial or non-commercial purposes. This is described in the other vignette of this package which you can view by the command

Now that we have a text that we can work with, we will download a pre-trained language model.

If you have downloaded a model once, you can also load the model directly from the place where you stored it on your computer. In my case, I have stored the model in a folder called udpipemodels

We can now use the model to annotate out text.

It can be useful to extract only the words and their pos-tags and convert them back into a text format (rather than a tabular format).

We can apply the same method for annotating, e.g. adding pos-tags, to other languages. For this, we could train our own model, or, we can use one of the many pre-trained language models that udpipe provides.

Let us explore how to do this by using example texts from different languages, here from German and Spanish (but we could also annotate texts from any of the wide variety of languages for which UDPipe provides pre-trained models.

We begin by loading a German and a Dutch text.

Next, we install the pre-trained language models.

Or we load them from our machine (if we have downloaded and saved them before).

And finally, we also pos-tag the Dutch text.

In addition to pos-tagging, we can also generate plots showing the syntactic dependencies of the different constituents of a sentence. For this, we generate an object that contains a sentence (in this case, the sentence Linguistics is the scientific study of language), and we then plot (or visualize) the dependencies using the textplot_dependencyparser function.

We now generate the plot. 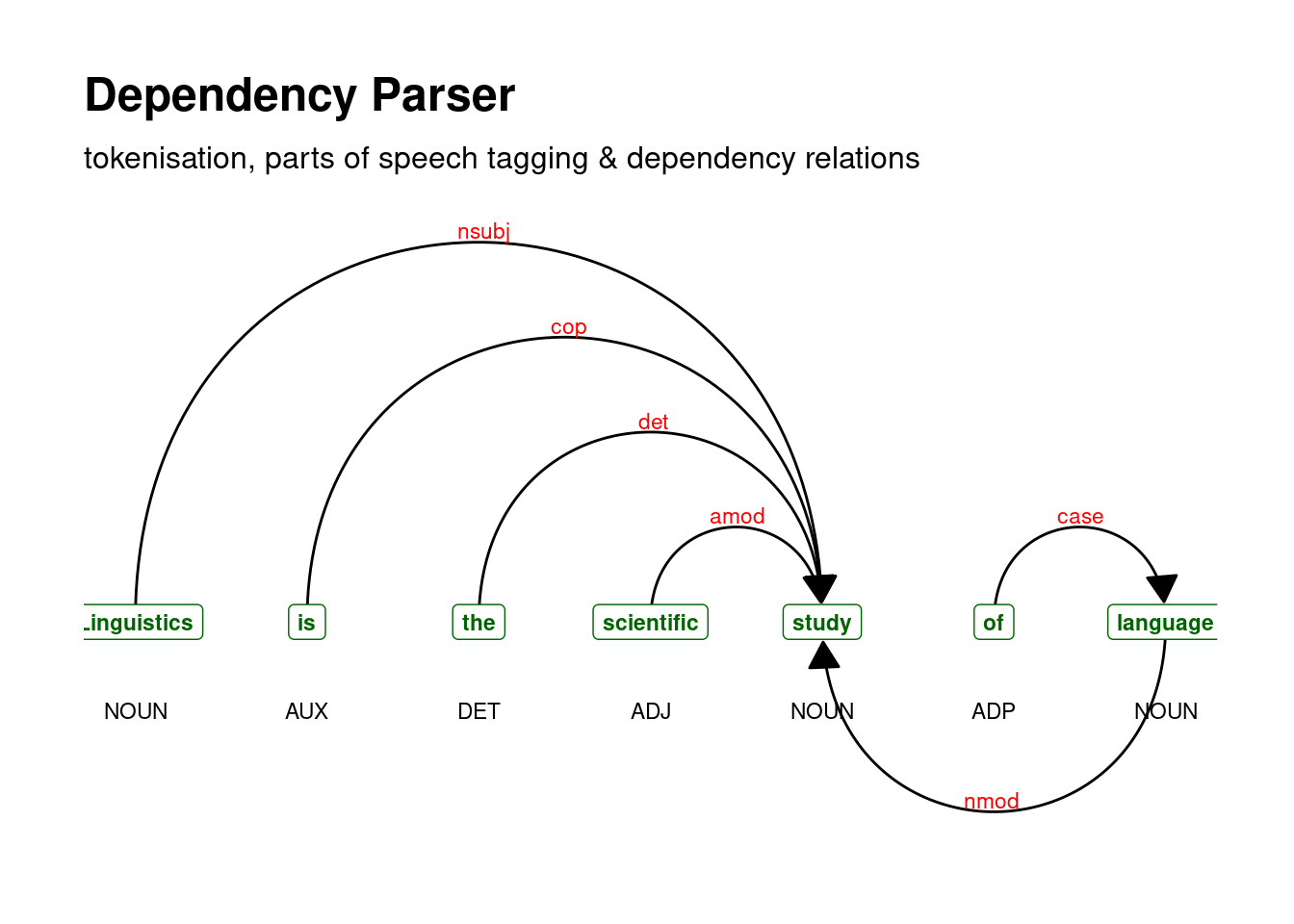 That’s it for this tutorial. We hope that you have enjoyed this tutorial and learned how to annotate texts using language models and perform pos-tagging and dependency parsing of English texts as well as texts in other languages.