This tutorial exemplifies how to create a vowel chart with Praat and R.

This tutorial is aimed at beginners and intermediate users of R with the aim of showcasing how to create personalized vowel chart using Praat and R. The aim is not to provide a fully-fledged analysis but rather to show and exemplify easily generate these vowel charts without much prior knowledge.

This tutorial is based on R. If you have not installed R or are new to it, you will find an introduction to and more information how to use R here. For this tutorials, we need to install certain packages from an R library so that the scripts shown below are executed without errors. Before turning to the code below, please install the packages by running the code below this paragraph. If you have already installed the packages mentioned below, then you can skip ahead and ignore this section. To install the necessary packages, simply run the following code - it may take some time (between 1 and 5 minutes to install all of the packages so you do not need to worry if it takes some time).

We now load the packages.

Once you have installed R and RStudio and once you have also initiated the session by executing the code shown above, you are good to go. Interestingly, a very similar figure can be created by plotting the Hertz frequency of the first formant of monophthongal vowel sound against the Hertz frequency of second formant minus the Hertz frequency of the first formant of a monophthongal vowel sound. Formants are frequencies of air waves that, if collapsed, form a complex vowel sound (Johnson 2003; Ladefoged 1996). In other words, vowels are periodic, i.e. rhythmic, compressions and decompressions of air and to create a vowel sound, i.e. a complex periodic wave, one needs to produce several simple periodic waves simultaneously. During acoustic analysis, the complex wave is deconstructed into its component parts, i.e. the simple periodic waves that make up that sound. This means that we do not necessarily have to plot the position of the tongue of a speaker when he or she produces vowels to create a vowel chart but that analyses of audio recordings of words in which vowels occur, can be utilized to plot a personalized vowel chart of a speaker. Such vowel charts can then be used in language learning as corrective feedback (see Paganus et al. 2006).

To produce a personalized vowel chart, the following steps are necessary:

The subsequent sections elaborate the above steps. However, before continuing a word of warning is in order. The example focuses on extracting and plotting vowel formants in an easy but also very uncontrolled way. In case vowel formant extraction is part of a proper research project, some additional steps are warranted. For instance, in a serious research project, it were necessary to control and reduce environmental noise and to optimize the recording situation, one would have to randomize the test items (words with the required phonetic environment and the respective vowel sounds) and use filler items (words that are not relevant for the analysis proper) in order to avoid participants guessing which items are relevant for the analysis, one would also use text grids in Praat to guarantee replicability instead of the simple measurements we use in the example here, etc. However, in case you are only interested in an approximation of your own vowel production and how native-like it is, the example fulfills its purpose and provides the reader with a step-by-step guide on how to plot your personalized vowel chart.

Downloading and installing PRAAT The first step is thus to download Praat form www.praat.org and to install it on your machine by following the instructions provided on the website and by the Praat installation script. Praat is an open{source software for acoustic analysis that was developed by Paul Boersma at the University of Amsterdam.

The following section describes how to record data in Praat (see Styler 2013 for a more elaborate description of how this can be done).

To record these words, start Praat with a double click on the Praat symbol which - after installation - appears on your Desktop. Two windows will appear: the main object window to the left and the picture window to the right (cf. Figure 2). Close the picture window on the right and choose New from the menu at the top of the main object window and select Record mono sound from the menu which pops up. For the recording it is, of course, necessary that a microphone is hook up to your machine { the better the microphone, the better the recording and thus the more accurate the graphical display we are going to produce. Each word should be repeated at least three times with a short break between the individual items so that what you record is had, had, had … pause … hard, hard, hard, etc. Try to sound natural, i.e. avoid speaking too fast or too slow, and try not to sound artificial or too careful.

While recording, there should be some green bouncing up and down in the vertical white " stripe (no bouncing indicates that your machine is not recording properly from the microphone).Once you are finished with your recording, select Stop and next select Save to list & close (cf. Figure 8). Saving has created an object in Praat’s main object window - in case you have named your recording vowels, the new object will be called 1. Sound vowels (cf. Figure 7). Before editing the data, it is advisable to save them on your machine. To save the data select the Save option from the upper menu, then select Save as WAV file... and navigate to the directory in which you want to save the recorded data. Figure 8: Save the recording as a .wav file

Next, select View & Edit in Praat’s main menu in the main object window. This will open Praat’s edit window (cf. Figure 9) - the object represents a recording of the word heed repeated three times for sake of simplicity. After recording and saving the data necessary for the task at hand, we continue by extracting the vowel formants.

Before extracting of the vowel formants, some parameters need adjusting. In a first step, go to Formant from the menu at the top of the edit window and select Formant settings.... Next, select the option Show formant and then, depending on whether the recording represents a male, a female or a child, adjust the Maximum formant (Hz) to 5000 Hz (male), 5500 Hz (female) or up to 8000 Hz (for a child) (cf. Praat User’s Guide. It may also be necessary to adjust the number of formants that Praat aims to find: the default is 5, but it may be set to any number between 3 and 7 depending on the data. To elaborate, if the formants do not exhibit a regular horizontal pattern but they are somewhat unsteady or the dots are all over the place, try to find the number of formants that provide the best results (i.e. steady horizontal lines). After having set the parameters, listen to the recording and highlight the section which represents the vowel sound you want to extract the formants from. Highlightling is done by selecting the start and end point of the vowel sound - the beginning and end of the steady line during which the vowel is produced - within the edit window as done for the first of the three instances of heed in Figure 11. The vowel formants can be extracted by going to Formant in the edit window and selecting Get first formant. Having done so, a window with the mean Hertz frequency of the first formant during the steady state is shown (cf. Figure 12). Please note that you should additionally extract the start and end time of the highlighted section from the display in the edit window. Figure 12: The mean Hertz frequency of first formant of the word heed during the steady state

To extract the second (and in case you want to use your data in other analysis also the third formant) simply choose Get third formant (and Get second formant), note down the Hertz frequencies in a table, and also note down the start and end time of the steady state. The final table should look like Table below (some columns are removed for sake of simplicity).

The next section describes how to plot the data and compare the vowels to equivalent vowels produced by native-RP speakers.

We will now process the data so that we can plot the F1 against the F2 values by speaker and word. In a first step, we load the data from the learner (nns) and the native speakers (ns).

The data of the native speakers, i.e the reference data, is shown below.

The reference data is taken from from Hawkins and Midgley (2005) (see here) and represents the first and second formant for the words heed, hid, head, had, hard, hod, hoard, hood, who’d, hud, and herd produced by 5 20 to 25 year old L1-speakers of Received Pronunciation.

We now combine the two data sets, rename the subject and item columns to Speaker and Word, add a column which holds the ipa symbols of the vowel sounds that the word represent, and we calculate the means of the F1 (F1_mean) and F2 (F2_mean) by Word and Speaker.

We can now generate the vowel chart by plotting the F1 values against the F2 values. In addition, we will differentiate between different vowel sounds as well as between the learner (Learner) and native speakers (NS). 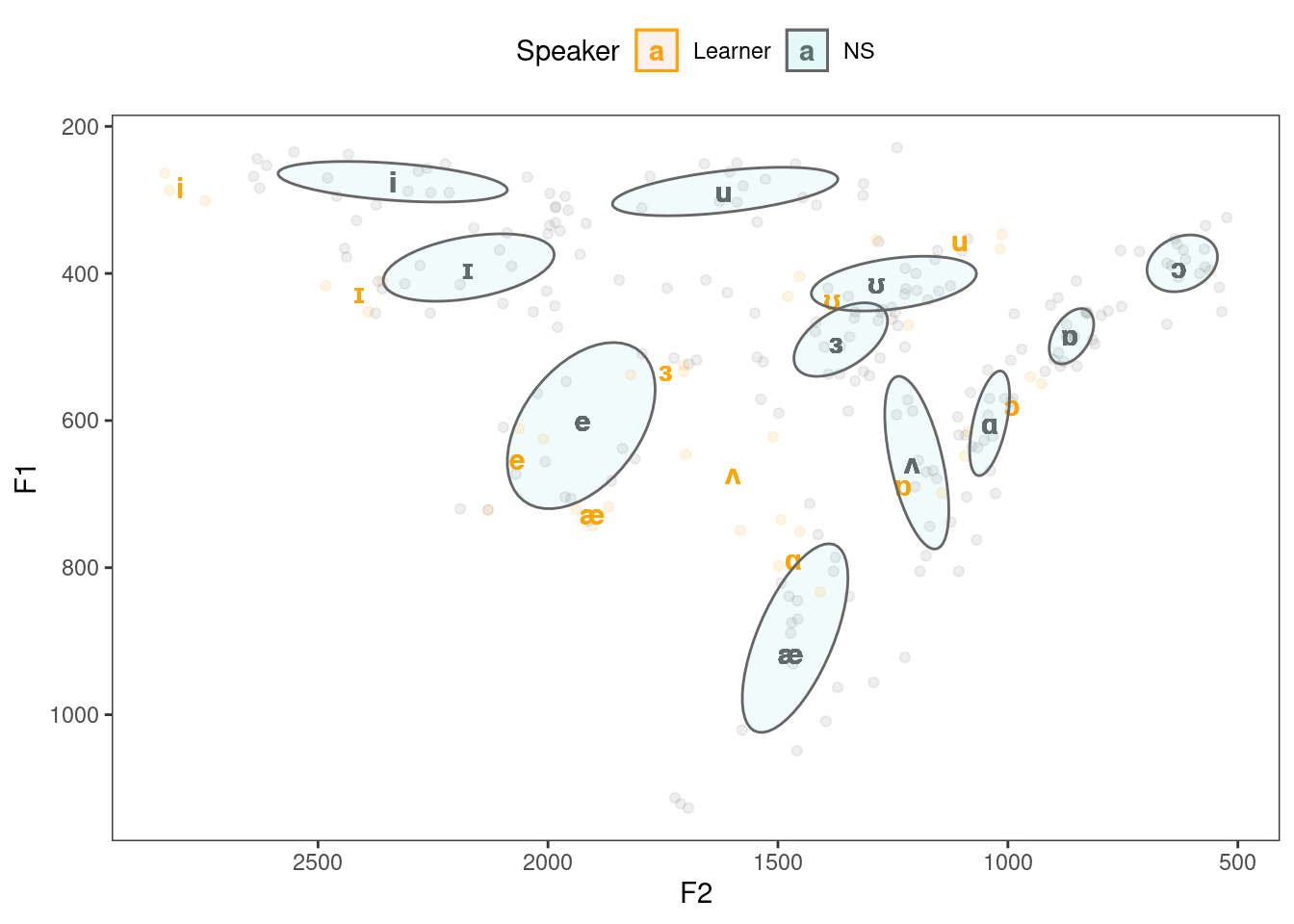 The vowel chart shows that the i-sounds by the L1-German speaker are more fronted and that the o-sounds are substantially higher by the non-native speaker compared to the RP reference vowel spaces. The short u-sound, however, is very similar, indicating that this L1-German speaker produces the short u-sound in English very native-like while the long u-sound is higher and more fronted in the speech of the L1-German speaker. Interestingly, the vowel space of the ash differs quite dramatically between the native speakers and the L1 German speaker which could be caused by the fact that German does not have an ash vowel. I hope this short tutorial helps you in creating your own personalized vowel charts with Praat and R.

Rogers, Henry. 2014. The Sounds of Language: An Introduction to Phonetics. Routledge.

Zsiga, Elizabeth C. 2012. The Sounds of Language: An Introduction to Phonetics and Phonology. John Wiley & Sons.